Some proposals for quick wins and longer-term changes 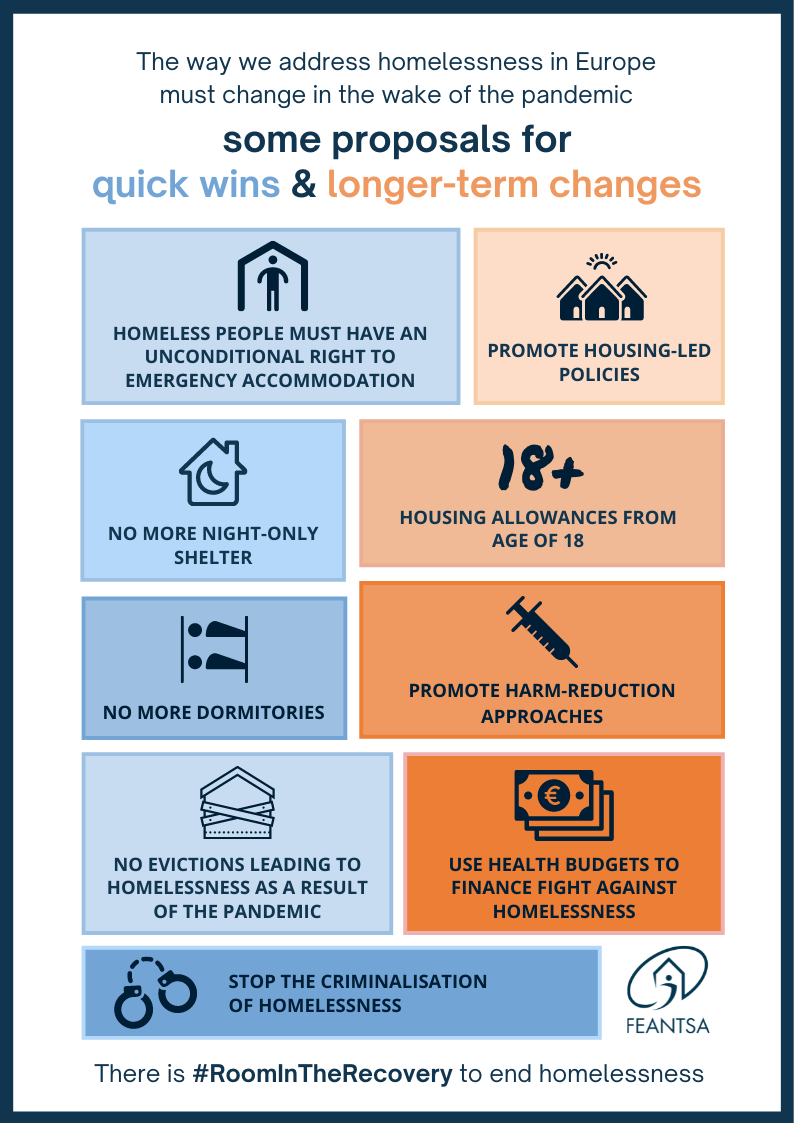 Homeless people are more vulnerable to infectious diseases than the general population. Not only because they often have underlying health conditions, but also because they usually live in (over) crowded places like shelters which can be hotbeds of infection. Experts therefore predicted that the Coronavirus would hit people experiencing homelessness hard and create disaster in homeless services. Fortunately, this disaster has been averted in most cases. Measures were taken to protect homeless people in many European countries. And they worked. Even if the infection rates were often higher than in the general population, the number of hospitalisations and the death rate were not disproportionate.

Moving into a new phase of the pandemic, which sees a large and increasing part of the European population covered by the vaccine, these protective measures are in danger of being revoked.  This must be avoided. In many cases, these measures do not only make sense from a public health perspective but have improved the situation for homeless people. Reverting to the pre-Corona period could be considered a violation of human rights in some countries, as retrogressive measures are prohibited. It could also prove futile as new variants threaten the possibility of further lockdowns.  The current turning point should be an opportunity to keep what has worked and stop unhelpful measures.

Homeless people must have an unconditional right to emergency accommodation

During the pandemic unprecedented efforts were made to get rough sleepers off the street into safe emergency accommodation as a public health measure.  In many European countries the number of people sleeping on the streets decreased substantially. Many rough sleepers were provided with accommodation in empty hotels or in student accommodation.  Many European countries also increased their shelter capacity. In the best cases, this was done in a way that allowed services to respect social distancing and thus improved the living conditions of service users.  Some of the new services were also better quality in terms of support. For example, harm reduction services were carefully planned and provided to enable substance users to stay safe and respect social distancing measures.

Public authorities must build on this success and ensure unconditional access to temporary accommodation for all homeless people, regardless of their administrative status, and guarantee that nobody is forced to sleep rough because of lack of services adapted to their needs.

The tens of thousands of homeless people who are currently accommodated in hotels, student accommodation or other settings mobilised during the pandemic, must not be forced back on the street or into inadequate shelter accommodation. They must be offered housing solution with any support that they require. Having provided these people with solutions to homelessness during the pandemic, public authorities have a unique opportunity to solve their situation for good. Such an opportunity cannot be wasted.

Providing homeless people with night-only shelter and forcing them to live part of the day on the street or use other emergency services obstructs their reintegration process. Few homeless people only need a bed for the night and not any other kind of support. At the outbreak of the pandemic, many night-shelters were promptly turned into 24/7 shelters as a public health measure. It allowed homeless people to reduce the time they would otherwise spend in public spaces, especially because many day centres and soup kitchens had to close during the pandemic.

FEANTSA wants 24/7 shelters to become the lowest threshold accommodation services for homeless people.  Night-only shelters should be gradually phased out.

In several countries the capacity of the existing shelters was substantially reduced to allow homeless people to respect the rules related to social distancing.  FEANTSA believes that small-scale shelters where homeless people or families have their own room and are not forced to share with others should become the norm in the future.  Not only does this make sense from a public health perspective, but it will also make the provision of quality social support easier and social integration more likely.  It is a question of privacy and dignity.

In the midst of a surge in the highly contagious Delta variant, this measure should be implemented without delay.

No evictions leading to homelessness as a result of the pandemic

Many people experiencing poverty struggled to continue paying rent during the pandemic and accumulated substantial rent arears. Most European countries imposed temporary eviction moratoria as a public health measure.  These moratoria are coming to an end and might provoke a wave of evictions which will inevitably lead to a spike in homelessness.  To avoid this, FEANTSA calls on governments to consider cancellation of (part of) the rent owed for people who are at imminent risk of homelessness and offer debt relief for people on low incomes.

Stop the criminalisation of homelessness

During the pandemic FEANTSA received regular reports of homeless people being fined or incarcerated because of not respecting Covid rules.  Even from a public health perspective, such measures make no sense. Homeless people are compelled to live and/or sleep in public spaces because there are no services which properly cater for their needs. They simply cannot “stay home”. Furthermore, homeless people cannot usually pay their fines. Prisons are places to be avoided during a pandemic and forcing people to hide to avoid criminalisation makes them even harder for health and social services to reach. In short, penalising people for being homeless during the pandemic puts them at greater risk.

In line with calls from several international human right bodies, such as the UN Human Rights Council and the UN Rapporteur on the Right to Housing, we want an immediate end to the criminalisation and penalisation of homeless people in Europe.

Apart from the above quick wins which would have immediate effect on the quality of life of homeless people, the pandemic raised some questions on the medium- and longer-term direction of homeless policies.

The pandemic taught us that housing is the best protection against infections.  Research shows that the health impact of good quality and affordable housing goes much further.  The WHO Europe calculated that an increase in public expenditure in housing by 1 percent of GDP narrows the health inequity gap by 2 percentage points.  That is twice more effective than increasing the public expenditure in health or social protection by 1 percent of GDP. The current political momentum around investment in housing as a public health measure should be translated into concrete measures for homeless people.

Housing allowances from age of 18

Young people in particular are struggling during the ongoing Corona-crisis. In recent years we have witnessed a rapid increase in youth homelessness in many European countries. Before the start of the pandemic 1 in 10 young people in poverty experienced severe housing exclusion in the EU.  This number has likely increased since due to increases in unemployment and housing cost, alongside other factors related to the pandemic.

Housing is increasingly difficult to access for young people. That is why it is so surprising to see that several countries restrict access to housing benefits to adults under a certain age.  The assumption is that people under 25, or sometimes 29, can stay with their parents if they do not have the means to rent a home of their own. This is often not true for young adults from poor families and/or in complicated family situations. To avoid further increase in youth homelessness after the pandemic, FEANTSA calls for housing allowances to be available for young people in need from the age of 18.

FEANTSA believes harm reduction services should be offered as the main intervention for homeless people with addiction problems. There is plenty of evidence that they are effective and better respect the dignity of people experiencing homelessness.

Use health budgets to finance fight against homelessness

There is increasing awareness among health professionals that housing is an effective treatment for homelessness. Substantial health gains can be realized by providing homeless people with access to decent and affordable housing.

Building on this increased awareness, FEANTSA calls on public authorities to use health budgets to pay for housing solutions for homeless people. It is about time to extend the trend of social prescribing to include housing. And it makes sense to call on the financial responsibility of the health sector, which is likely to gain substantially from the avoided costs of homelessness.

As part of the #RoomInTheRecovery campaign, FEANTSA is monitoring developments in homelessness policy in Europe, especially those related to protective measures taken during the pandemic or to recovery plans. 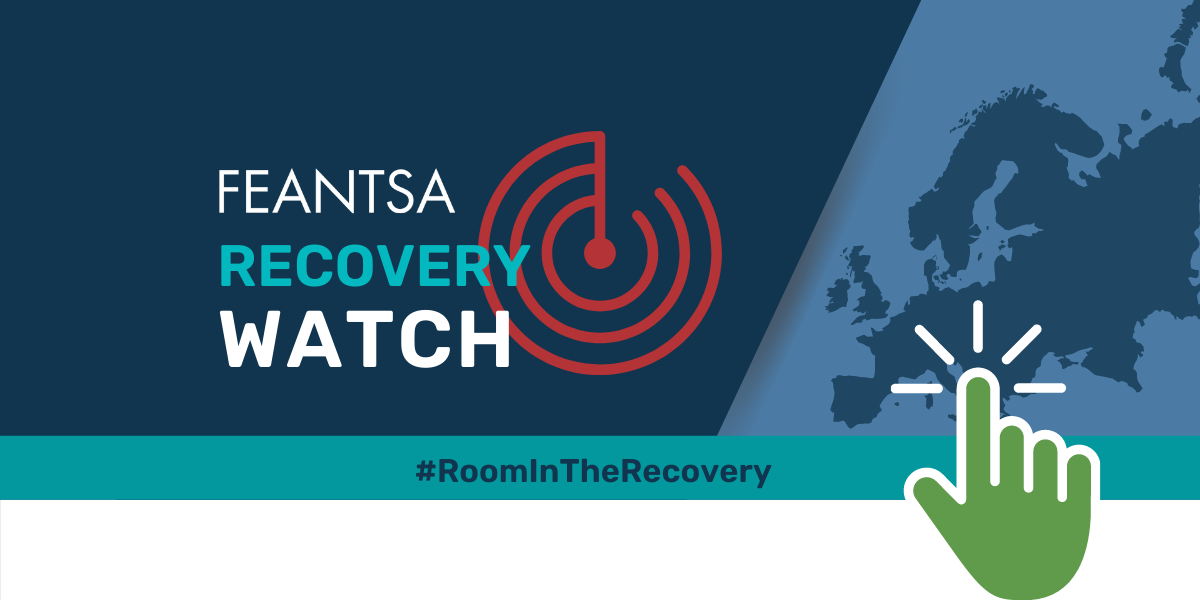